The latest statistics for marriage in England and Wales reveal that marriage rates for opposite sex couples have fallen to the lowest on record, underlining the need for family law reform, particularly regarding cohabitation rights.

The report, published in February 2018 looks at data from 2015 when there were 239,090 marriages between opposite sex couples – 8,352 fewer than in 2014. Even when we account for the increasing number of same-sex marriages since it became legal in 2014, it isn’t enough to make up for the overall reduction in the number of marriages, with just 6,493 same sex marriages in 2015.

Instead of getting married, more people are living in different arrangements. While the marriage rates have been steadily declining since the 1970s, the number of people cohabiting has been rising, but UK family law hasn’t changed with the times.

Cohabiting couples have very few rights protecting them or responsibilities toward each other. Whether the cohabiting couple are friends or living as if they were married one of them could simply walk away without taking any responsibility for a former partner if the relationship breaks down. This can mean that a partner could take everything that’s theirs and leave, whether that’s the house, the savings in their bank account, or even things they’ve bought for the household. 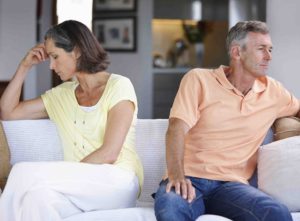 With the crisis in housing and the rising cost of living, couples are more likely to opt for living together without getting married. While many might do this because they don’t want to be married, they assume they would have almost the same rights and responsibilities to one another as a married couple should they split up, and sadly that isn’t the case.

The situation is even more concerning when there are children involved – as is the case for 47% of cohabiting couples. This can mean that a partner could be emotionally devastated and separated from their savings, their home and their children who will be even more emotionally distraught.

10 years ago, in 2007, the Law Commission recommended that family law is reformed and rights are afforded to cohabiting couples, but the situation is still unchanged even though the number of cohabiting couples has continued to rise.

This lack of basic rights means that the 269,000 cohabiting couples in the East Midlands are vulnerable. Only Living Together Agreements and other elements of property law can give them some protection. But just as Pre-Nuptial Agreements have to be agreed at the start of the relationship, Living Together Agreements have to be agreed before the couple separate and property law wasn’t created for this purpose.

To make matters worse, some of my clients who have split up from a partner have wrongly thought that they have these rights already: They wrongly believed in the existence of a “common law wife” legal status in family law, which they thought gave them protection similar to that of a traditional marriage, and they are shocked to find that simply isn’t the case.

This leaves them vulnerable to complex and lengthy disputes over property, children and savings – with women particularly at risk if they’ve given up work or reduced their workloads to raise children.

Same sex couples are also vulnerable because they are more likely than others to be in cohabiting relationships, partly because of how relatively new same sex marriages are in the UK.

Last year, alongside Resolution, I campaigned for family law to be reformed so that cohabiting couples have stronger rights. Sadly, our efforts are yet to lead to a change in the law, but we did succeed in building up support for the changes cohabiting couples need.

During my campaign, I wrote to Newark and Sherwood MP, Robert Jenrick to tell him about this situation, and I’m pleased that he has given it his support:

“As an MP I have had countless conversations with my constituents about living arrangements and the law, and the most pressing concern has been the question of legal certainty. I remember a couple of years ago I had a conversation with two elderly sisters living together, who were concerned that it was unclear what would happen to their home if one of them were to pass away.

When a couple is married it is clear which rights are extended to who, but when individuals live together there is a distinct lack of clarity. As a former lawyer this is something that I believe matters profoundly. The Law needs to take into account the changing face of society, in a decade where fewer people are getting married than ever before, whilst also not doing anything to undermine marriage as an institution.”

There are ways in which cohabiting couples can protect their rights through Living Together Agreements and at Gouldingays Family Law & Mediation we are able to help with that, but unless cohabiting couples know how vulnerable they are, they’re unlikely to seek out this kind of legal protection.

It’s time for the law to catch up with 21st century family-life.

I would like to see the legal rights of cohabiting couples made stronger and more clear, to avoid leaving people bereft, confused, out of pocket, and caught in lengthy legal disputes if they split up.